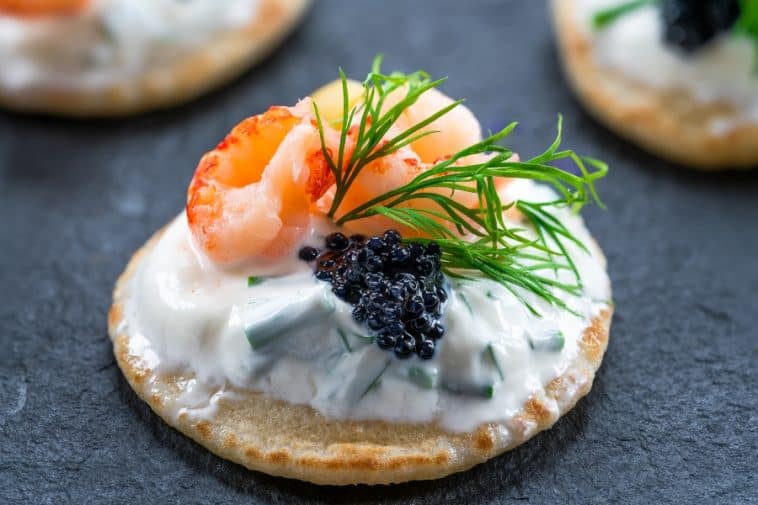 What Is a Blini?

Before you can get down to comparisons, it’s important to know what exactly a blini is. The batter of a blini is made using buckwheat flour and does not have any sugar in it. The finished product is similar to a pancake but is thin like a crepe and then stuffed with either a sweet or savory filling.

A blini is native to Russia and is often associated with caviar. However, a blini can be stuffed with anything from jam and honey to sour cream and butter. A blini also tends to be much fluffier than a traditional crepe because of the fact that the batter contains yeast in it.

Blinis are incredibly versatile and can even be eaten on the go as they make great handheld foods. Blinis are so popular in Russia that they have their own weeklong holiday known as “Butter Week.”

What Is a Crepe?

A crepe is a thin pancake-like food that is typically made from flour, eggs, and milk. They can easily be made in just a couple of minutes and stuffed with different kinds of ingredients. They are not fluffy like pancakes and are easy to roll up. Crepes can be stuffed or eaten on their own. Crepe batter can be made ahead of time and stored adding to it’s convenience.

A crepe pan can also be used to make a number of delicious dishes so it is a great tool for the kitchen.

Differences Between a Crepe and a Blini

For one, a crepe’s origin is in France, while a blini comes from Russia. As mentioned earlier, a blini is also fluffier than a crepe so its texture, which is spongy and springy, is more similar to that of a pancake. However, it is still flat just like a crepe.

Similarities Between a Crepe and a Blini

There are several similarities between crepes and blinis, so much so that people often confuse the two. Both are thin, pancake-like, and made from a batter consisting of flour, eggs, and milk. They can both be made either savory or sweet and can be eaten for breakfast, lunch, or dinner. In fact, they can even make a tasty snack.

History of the Blini

A blini was considered to be a symbol of the sun by East Slavic people, due to the circular shape of the blini. It was oftentimes served at wakes to commemorate the dead, typically with a side of sour cream and caviar. To this day, it is still enjoyed this way.

Wheat flour is traditionally used to make a blini although other types of flour can also be used. Blinis became more popular in the United States after Jewish refugees began escaping Eastern Europe to avoid persecution and violence.

Blinis are also very popular in Russia, where they are baked in a Russian oven as opposed to being pan fried.

History of the Crepe

Crepes are famously known for their French origins. Their name comes from an Old French word known as “crespe,” which means curled. This is in reference to the slightly curled edges that a crepe has when it cooks.

Traditionally, crepes are made with buckwheat flour but many places, particularly in other parts of the world that don’t include France, make them with white flour.

Crepes are incredibly popular in France to this day – so much so that there is a nationally recognized day known as “The day of the crepe” that takes place on February 2.

In France, crepes are enjoyed folded up, not rolled up like how people eat them in the United States. The French prefer to fold their crepes as this keeps the filling from falling out when being enjoyed.

Crepes are incredibly popular for their versatility as they can be eaten with a sweet or savory filling, or just on their own. 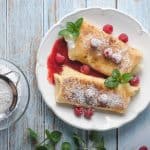 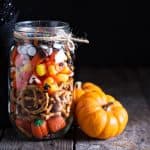