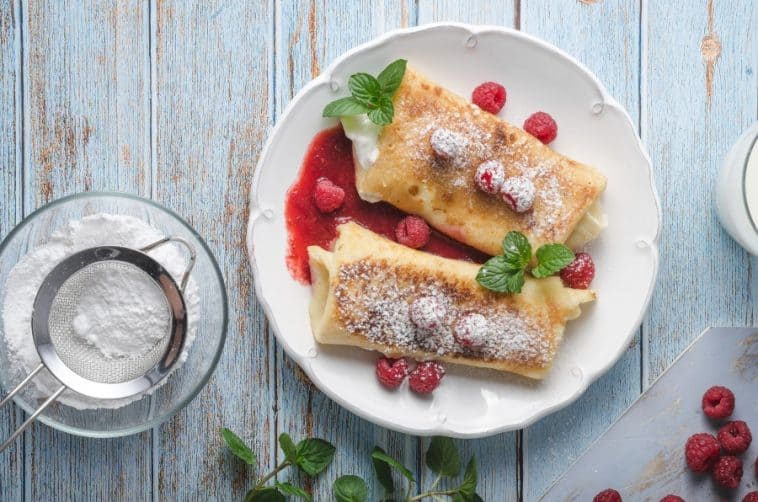 Many people may not be entirely familiar with what a blintz is. However, it’s a pretty common treat in Russia and the Ukraine. A blintz is a thin pancake similar to a crepe that is stuffed with sweetened cheese. Traditionally, a blintz is filled with what is known as “farmer’s cheese.”

A crepe is a thin pancake that gets stuffed or folded with sweet or savory ingredients. The main difference between a pancake and a crepe is the batter. Pancake batter has baking powder in it to help it rise and make your pancakes nice and fluffy. Crepes, however, are meant to be thin and flat.

What Is the Difference Between a Crepe and a Blintz?

A crepe and a blintz both have a lot of things in common but are ultimately two different things. Crepes originated in France, while a blintz has Russian and Ukrainian roots. Although both crepes and blintzes resemble thin pancakes, a blintz is always filled with the sweet cheese filling while crepes can be eaten plain, with fruit, or as a savory dish.

How Are a Crepe and a Blintz the Same?

As mentioned earlier, both of these dishes are extremely similar. For one, they can both be described as “thin pancakes.” They are also both made from wheat flour and can be made either sweet or savory.

Another similarity between the two is that they both have interesting origins. For example, crepes originated in Brittany, France in the 13th century. Like all great things, crepes were invented accidentally but have since then been enjoyed near and far.

A blintz comes from Central Europe, specifically Poland, Hungary, and Slovakia around the 1800s. They have since become popular in all parts of the world, where cultures put their own unique spins on their version of a blintz.

Which One Is Easier to Make?

Both crepes and blintzes are fairly easy to make as it all boils down to making the batter and then pouring it over a hot pan. However, a blintz might prove to be a bit more difficult as it needs to be cooked twice.

Not only that, but you must be able to cook it again without spilling any of the contents that are wrapped up inside of it.

Crepes on the other hand can be eaten on their own and don’t need to be cooked more than once.

Crepe batter can be stored which is a great benefit as well.

Which One Is More Popular?

It’s safe to say that a crepe is more mainstream than a blintz due to the fact that they now appear on restaurant menus everywhere. A blintz is more commonly eaten among people who have Central European ancestors or who grew up eating them. Blintzes can be eaten with a lot of great dishes.

Again, many people have their own versions of both of these dishes so a blintz might be just as popular as a crepe but under a different name.

Read more on what can be made with a crepe pan

Which One Came First?

As mentioned earlier, the crepe came to be in the 13th century thanks to a housewife who accidentally spilled some porridge on a hot flat top. Because food was so sparse back then, she and her family had no choice but to eat her “mistake.”

Luckily, this dish became a hit, and the rest is history.

A blintz didn’t come around until the 1800s and, therefore, came much later than the crepe did. 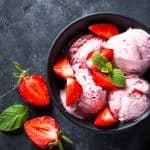 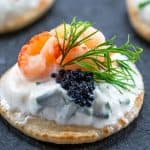