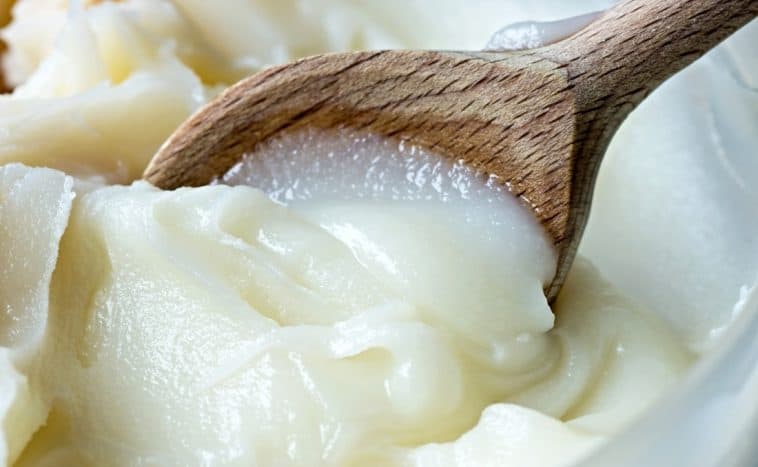 Lard is used in everything from cookies, pie crust, for frying, baking, halal and even beans and tortillas.

No matter what you are making there are number of great substitutions you can use in place of lard.

We will cover vegetarian, vegan, and dairy lard alternatives so matter what type of diet you eat we have you covered.

So what are the best lard substitutes?

Lard is a traditional ingredient used in many types of recipes. It has had a resurgence in popularity recently but it is not always easy to find at the local grocery store. If you need a lard replacement because you don’t have any on hand, or for dietary reasons, one of the following ingredients will work for you.

Be sure to read on for how to use each alternative for your dish.

Butter is the most common substitute for lard. It works in all types of recipes including baking, frying, cooking and more.

Butter contains less fat than lard so more butter will be needed than lard in most recipes. You can use unsalted or salted butter but if adding to a recipe unsalted is recommended or you will need to reduce additional salt from your recipe.

Ghee, a form of clarified butter, is another excellent substitute for lard. It is often overlooked but is one of the best lard alternatives for all types of recipes.

You will get the same rich buttery flavor and it works well in pie crust, tortillas, beans, halal and other baked dishes.

Ghee also has a lower fat content than lard so more ghee will be needed when subbing for lard.

Oil has a high smoke point making it ideal for frying, roasting, sautéing, and grilling.

When replacing lard with vegetable oil for cookies and cakes you will have a denser and less fluffy result.

For this reason, vegetable oil is better suited for frying than making cakes and cookies.

Beef tallow is an excellent substitute for lard in all types of recipes. Beef tallow is rendered fat that has had any impurities cooked out of it. Because it is very similar to lard, beef tallow can be used at a 1:1 ratio in almost all recipes.

Beef tallow works in pie crusts, for frying, and in baking. Little difference will be noticed in your recipe when using beef tallow.

Coconut oil is an excellent vegetarian substitute for lard in all types of dishes. Coconut oil works in baking, frying, roasting and grilling.

For this reason it is best to use coconut oil in dishes where coconut flavor is complimentary.

Avocado is an interesting lard alternative for those seeking a vegan or vegetarian option. Avocado offers a similar texture and a high fat content making it ideal for baked recipes.

Whether making cake or cookies this is a great lard replacement. It also works well in breads and muffins.

Avocado offers a flavor that pairs well in so many recipes and they are easy to come by most times of the year.

It also is an excellent substitute for lard when frying, sautéing, and roasting.

Olive oil offers a different flavor than lard but it works in many dishes. But it is not the best option for baking or in sweet desserts.

If you still want to use lard but you just cannot find it at your grocery store, then you can render your own.

Use back or leaf pork fat and cut it into 1/2 chunks. Add a couple tablespoons to the bottom of a large pan to prevent your fat from sticking.

Bring to medium low heat and stir occasionally while your fat renders for about 45 minutes.

Return the fat to heat and cook for twenty minute increments four more time, straining out your fat each time.

Allow your fat to cool, and now your have lard perfect for any recipe!

If you are looking for a low calorie, vegan substitute for lard then mashed bananas are what you’re looking for.

Bananas not only work in baked dishes they also provide extra nutrients to your dish. Bananas are ideal for baked desserts but they are not well suited for frying or savory recipes.

Use mashed bananas when baking breads, muffins, or cake.

Can Crisco be used in place of lard?

Yes Crisco can be used in place of lard in baked dishes. It works well in cookies, cakes, and breads.

Crisco is not ideal for frying, another oil should be used instead.

Is lard the same as shortening?

No, lard and shortening are not the same thing. Lard is rendered pork fat while shortening is oil. Both can be used in similar recipes though.

Is Trex the same as lard?

No. Trex is a solid vegetable oil brand while lard is rendered pork fat.

Is bacon grease a form of lard?

No, bacon grease is not lard. Lard is rendered from back or leaf fat and not bacon.

Bacon fat can be used to substitute for lard but it will impart little flavor and will lead to a more flaky consistency.

When making tortillas, the best substitutes are butter, ghee, and vegetable shortening.

When making refried beans without lard, use butter, ghee, or vegetable shortening.

You will want to use vegetable shortening or coconut oil.