Plum preserves is sweet and delicious and is called for in many recipes. If you are all out of plum preserves and you can’t find any at your grocery store, don’t give up on that recipe just yet.

There are multiple substitutes you can use no matter what type of recipe you are making. Plum jam is a great topping for English muffins and bagels but it also can be found in baked goods and even savory dinner dishes.

So what are the best substitutes for plum preserves?

I’ve found these flavors to work wonderfully in most recipes that use plum preserves. Read on for more info on each alternative and how to use them in your recipe.

Traditional plum preserves are made using only plums, water and sugar. While you can find plum preserves at some grocery stores, it’s not always the easiest type of jam to find. So until you have time to make your own, use one of these great substitutes for plum preserves.

While apricot jam does not taste the same as plum preserves, it offers a similar level of sweetness and it’s flavor pair wonderfully with the same things as plums do.

Apricot jam is a staple in my kitchen. It works on sandwiches and toasted English muffins as well as it does in baked goods.

Apricot jam is also much easier to find in most regions. Overall this is my favorite replacement for plum preserves.

This popular fall flavor is an excellent substitute for plum jam or preserves. With just the right amount of sweetness and a similar texture, apple butter works in all types of recipes.

Made by removing the moisture from crushed apples, apple butter works incredibly well in baked recipes or as a topping for toast and bagels.

It’s also readily available in most areas, and at a reasonable price.

If plums are in season, you can get that sweet and delicious flavor of plums by going straight to the source. Fresh plums can be mashed and used in most recipes that calls for plum preserves.

While it won’t be ideal for spreading on your breakfast bagel, it will incorporate in most baked goods that need that plum flavor.

You will find that many recipes that call for plum preserves also call for ginger. That’s because these two ingredients pair incredibly well.

But you can also use ginger jelly in place of plum preserves. It goes well in cakes and cookies, and is a great way to add some spice to your recipe.

If you want to replace plum jam with another fruit preserve but don’t have apricot available, peach preserves are the way to go.

Peach preserves add just the right amount of sweetness to all types of recipes. My family loves peach with breakfast and I am a fan of baking with peach preserves. No matter what you need plum preserves for you can’t go wrong using peach reserves instead.

The key to replacing plum preserves is using an ingredient that pairs well with the other ingredients in your recipe.

And you will find that the alternatives on this list will work well in any recipe that calls for plum preserves. 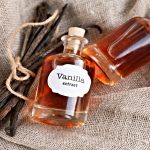